Mitt Romney spoke via satellite from his Super Tuesday campaign

Just returned this evening from the AIPAC Policy Conference in Washington, D.C.  This was quite an experience, and as I was unwinding on the five-hour plane ride home, I began putting my thoughts in order.

So, first of all, I’m not going to be commenting on the specific issues or make any partisan political comments.  Though I do have my own views, I am going to keep them to myself; one of the accomplishments of the conference, I think, was the extent to which AIPAC maintained a bipartisan air to the proceedings.  Of course, the speakers and candidates each pressed their version of reality…but the overall atmosphere cultivated by the conference organizers transcended party lines and emphasized unqualified support for Israel.

Here are some things that stand out from the experience:

Some 13,000 people attended the 3 day conference at the George Washington Convention Center. Most of course were Jews, but there were significant representations by both African American and Asian American pro-Israel delegates.  A true feeling of עם ישראל – the Jewish people – permeated the conference.  A real treat to see how many people care about the safety of our brothers and sisters in Eretz Yisrael.
2. Orthodox Representation

I estimate that close to a thousand of the people there were Orthodox Jews. This was beautiful to see; it was a strong message to our fellow Jews that the Torah sets Pikuach Nefesh – Medinat Yisrael and saving lives (which, after all, the Iran question is all about) is at the top of the observant Jewish agenda.  There were so many Orthodox rabbis and educators there, that the OU had a special reception on Monday evening after Netanyahu spoke – solely for the purpose of those associated with OU synagogues to get together. 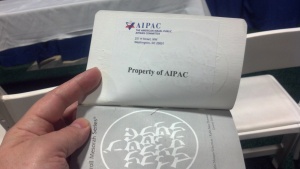 Another indicator of high Orthodox participation: A makeshift synagogue with Siddurim!

There were a couple of beautiful meals, including a reception on Monday evening – but mostly, we had to buy our own meals, a la carte…and they were expensive.  That said, all the food sold and every event was strictly kosher. This is a major accomplishment and attests to the extent to which the presence of halachically-observant Jews can impact on the character of a Jewish communal event.

I think of all the figures that spoke at the conference, I was most impressed with the demeanor and delivery of Susan Rice, US ambassador to the UN. She spoke at a luncheon attended by 400 members of the Jewish clergy, including Orthodox rabbis as well as representation from Conservative and Reform.   Once again, I am not going to comment on the content or the policy of the present administration, but Rice’s respectful presentation was something to behold.  Here’s the whole speech: 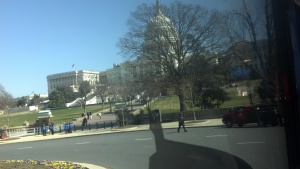 On the way to lobby Rick Larsen

We went to Capitol Hill on Tuesday morning…over 500 meetings were held between delegates congressmen and senators!  I joined a group that met with Washington State Congressman Rick Larsen http://larsen.house.gov.  We met with him for about 40 minutes, and the topic was, of course, Iran.  Here is a blurb from the AIPAC website, written before the visit to Capitol Hill, reviewing the content of the lobbying sessions:

AIPAC activists will also urge lawmakers to support the United States-Israel Enhanced Security Cooperation Act of 2012, which House and Senate members plan to introduce in the coming days. The legislation is expected to recommend several ways to strengthen U.S.-Israel strategic cooperation in such fields as missile defense, homeland security, energy, intelligence and cyber-security.

Here’s an excerpt from what Obama said about Iran: