From the Tent of the Meeting 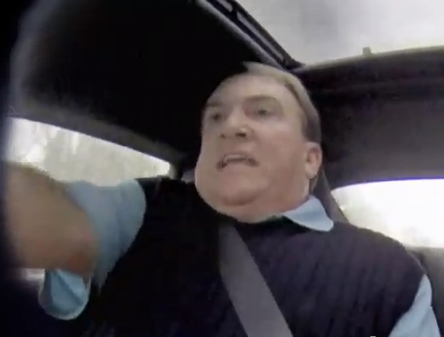 Two days ago, Pepsi released a commercial that has gone viral in a big way. On its first day, it had 2.95 million hits; By erev Shabbat, the number stood at 15 million…and as I write, the video has over 24 million views.
In the video, race car driver Jeff Gordon arrives at a used car lot somewhere in North Carolina, presenting himself as a simple guy looking for a used car. A series of hidden cameras, including in Gordon’s eyeglasses, his Pepsi Max can mounted on the dashboard of the car, and elsewhere, film the ensuing spectacle. The victim? Unsuspecting used car salesman, Steve, who joins Gordon on a test drive in a 2009 Chevy Camaro. What ensues is a five minute terror trip, as the Camaro reaches breakneck speeds, salesman Steve curses Gordon – and hangs on for dear life! As they screech back to the dealership, Steve is furious and runs to call the police. Gordon reveals the prank: fake moustache and beard, cameras all around…. a 2013 version of “Smile- you’re on Candid Camera!”

At the recommendation of my wife, I consulted Snopes.com and read of the many clues indicating that the entire event was staged. A stuntman, not Gordon, drove the vehicle and salesman Steve is an actor: Were Steve to have been a real salesman, he could have sued Pepsi for tens of millions of dollars!
A couple of days have passed since I first saw the commercial, and I’ve had some time to let things gel, so that I can present what I hope is a mature response.
Perashat Vayikra opens: וַיִּקְרָא אֶל משֶׁה וַיְדַבֵּר ה’ אֵלָיו מֵאֹהֶל מוֹעֵד לֵאמֹר

On this verse, the midrash says:

“He called to Moshe and Hashem spoke to him”…From here, the sages taught: “Any Torah Scholar who lacks wisdom, an animal carcass is better than him!” We can learn this from Moshe, the father of wisdom, the epitome of prophets, who took the Israelites out of Egypt, and through whom a number of miracles were wrought in Egypt along with wonders at the Red Sea; Though he rose up to the heavens and brought us down the Torah and was involved in the construction of the Tabernacle, he did not enter into the holy of Holies until Hashem called him.
The Midrash goes on to say that in the merit of Moshe’s caution, Hashem spoke to him directly and consecutively from the Tent of the Meeting; this stands in contrast this to the manner in which Hashem spoke to him years earlier, at the burning bush, where communication was less direct.

What is the concept of a Torah Scholar who lacks wisdom? For the Torah scholar, what is wisdom but Torah knowledge ? How is a Torah scholar without wisdom worse than a carcass??

The answer, I think, lies in a commentary by Rabbi Yitzhak Hutner, the Pachad Yitzhak. Rabbi Hutner distinguishes between pure Torah knowledge – the intricacies, ins-and-outs of the minutae of halacha, vs. what he calls “elective acts” – mundane matters that a person faces on a daily basis not specifically governed by halacha. Following the Rambam, Rav Hutner notes that the extent to which mundane activities are subsumed under the rubric of “mitzvot” depends on the degree to which the individual chooses to imbue them with meaning by approaching them from a Torah perspective; the דעת referred to in the midrash is this second type of understanding: an intuitive sense the Torah’s perspective on matters unlegislated by Jewish law.
Technically, it is possible, therefore, for a Talmid Hacham to lack דעת. Though he may have the entire corpus of Torah under his belt, this is no guarantee that this knowledge impacts on his life in general.

The meat of an animal that was killed or died on its own is halachically forbidden. Though its value is questionable, everyone would agree that the animal during its liftetime was worth something, a purposeful creation. A Talmid Hacham who lacks the faculty we have been describing, however, is completely worthless. Torah knowledge stripped of its ability to impact on our broader lives is absolutely pointless!*

Rambam, following our sages, points out that there are two crowns – Keter Malchut and Keter Kehuna – the crowns of kingship and of priesthood; these crowns are inaccessible to most Jews, since they are positions that one must be born into. Keter Torah, the crown of Torah scholarship, on the other hand, is open for all to access. True, the midrash speaks of a classic Talmid Hacham, but it is relevant for all who engage in Torah study. We must all make sure that our Torah learning impacts on our lives as a whole!

The Torah prohibits something called אונאת דברים, verbal abuse. If I give someone advice that’s not in his best interests (especially if I have some self-interest in his decision) or remind a penitent of his past or a convert of the idolatrous deeds of his ancestors, I am guilty of verbal abuse.

Ya’akov Avinu, our forefather Jacob – after whom we are named – is encouraged by his mother Rivka to dress up like his brother Esav in order to acquire the birthright. His response? אולי ימשני אבי -“Maybe my father will feel me and discover that it’s really me.” The use of the word אולי – denotes a hopeful “maybe”, says the Talmud. Even though it was for a right cause – guaranteeing the Jewish future – Ya’akov hoped against hope that he would be found out! So greatly did he detest שקר, deception….

Can the Jewish revulsion towards abuse and deception impact on the sphere of our “elective thought process?”
What should be our response to the Pepsi commercial? It depends on a frank answer to the following question: When we watch the commercial – and the camera hones in on the mortified “used car salesman”, why are we laughing? Are we laughing out of nervousness, empathizing with the fear of the terrified passenger? Or is our laughter more sadistic? Do we identify with the perpetrator of the prank?

My guess is that the video’s general appeal to the viewer is that we identify with Jeff Gordon; that explains the video’s 24 million hits.
As heirs to the legacy of our father Jacob, the deception that frames this prank – real or staged – should be inherently repulsive to us. And if a mere harsh word is a Torah prohibition, we should distance ourselves from the torment – real or staged – that takes place in the film. The דעת that we should have as faithful students of Torah demands no less.

Responding in the spirit of our tradition is an indicator that we have allowed Jewish law to mold our personalities.  If we have been successful in doing so, we will ultimately merit, as did Moshe Rabeinu, being summoned by Hashem, directly — from the Tent of the Meeting!